As a Church of England school, Religious Education carries a high status within our curriculum. Religious Education has a significant role for the development of pupils’ spiritual, moral, social and cultural development. It promotes respect and open-mindedness towards others with different faiths and beliefs, and encourages pupils to develop their sense of identity and belonging through self-awareness and reflection. Pupils will explore Christianity and other world religions, developing their thinking and understanding of the world and their experiences within it.

Through exploring Religious Education, pupils will be given opportunities to study:

Our teaching follows guidance from the Diocese of Rochester and we have adopted the 'Understanding Christianity' curriculum.  'Understanding Christianity' supports pupils in exploring the significant theological concepts within Christianity as part of developing their wider religious, theological and cultural literacy. This is an enquiry-based curriculum where pupils begin with a ‘Big Question’ to explore and answer, examining core biblical texts and their impact on Christians, and making connections with their own lives and other religions.

There is opportunity for teachers to tailor the approach for their unique classes and pupils. Pupils are encouraged to formulate and pose their own questions, and Religious Education lessons are a safe space for children to explore challenging and sensitive subjects.  More able pupils are encouraged to dig deeper within the concepts while children with additional needs are supported to achieve within the Religious Education curriculum. 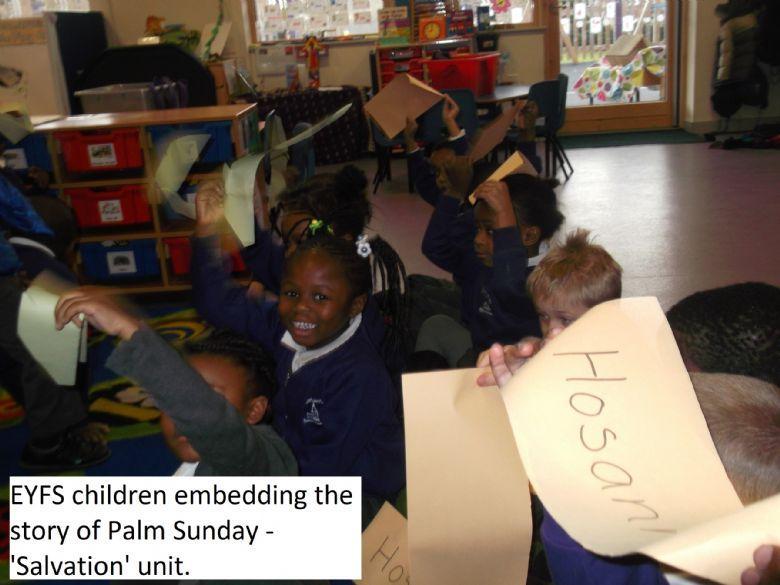 Our teaching follows guidance from the Diocese of Rochester. 'Understanding Christianity' forms the basis of the Diocesan syllabus together with materials for teaching and learning for the different world faiths.  You can find an overview of the units taught in each year group at the bottom of the page.

'Understanding Christianity' supports pupils in exploring the significant theological concepts within Christianity as part of developing their wider religious, theological and cultural literacy.

'Understanding Christianity' is a spiral curriculum where key concepts are built upon and re-visited: 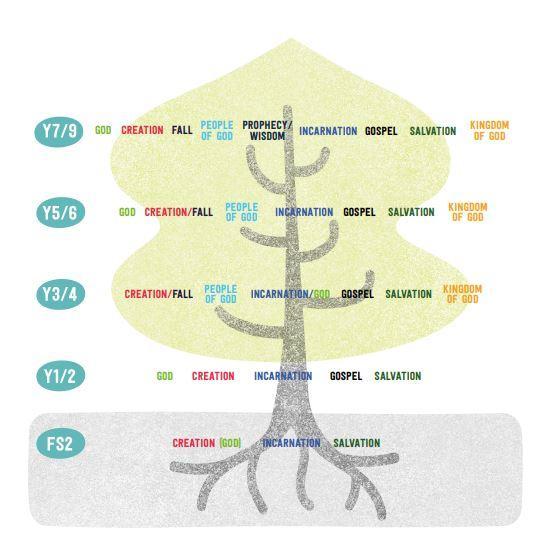 * EYFS and Yr1 explore stories from other faiths and cultures to support their growing understanding of Religious Education.

Our pupils receive the full entitlement of Religious Education as per the guidance of the Diocese of Rochester. Pupils study Christianity for at least 66% of the school year (the Diocese recommendation is at least 50%) and as a core subject at Christ Church (Erith) CofE Primary School, RE has dedicated time on every class' weekly timetable; accounting for 10% of timetable provision (the Diocese recommendation is at least 5%).

Understanding the impact – Examining ways in which Christians respond to biblical texts and teachings, and how they put their beliefs into action in diverse ways within the Christian community and in the world

Making connections – Evaluating, reflecting on and connecting the texts and concepts studied, and discerning possible connections between these and pupils’ own lives and ways of understanding the world.

Each unit begins with a ‘way in’ and then offers teaching and learning ideas for each element. The teacher chooses how to weave together the elements, from making sense of the text, through looking at the impact on the world of the Christian, and helping to make connections with the world of the pupil, in order to achieve the outcomes.

This model shows that the ‘Understanding Christianity’ approach is not just allowing pupils to learn what Christians believe. Instead, it is about developing skills to help them ‘think theologically’ alongside learning knowledge of the Bible, Christian belief and practice. It also shows that these three elements do not represent rigid, distinct steps, but that pupils can ‘make connections’ whilst ‘making sense of the text’, for example.

To find out more about 'Understanding Christianity' you can visit the website:

This term children in Reception have been finding out what stories are told about Jesus in the Bible. They visited Christ Church for their first school trip and looked for Jesus in the wall art and stained glass windows. 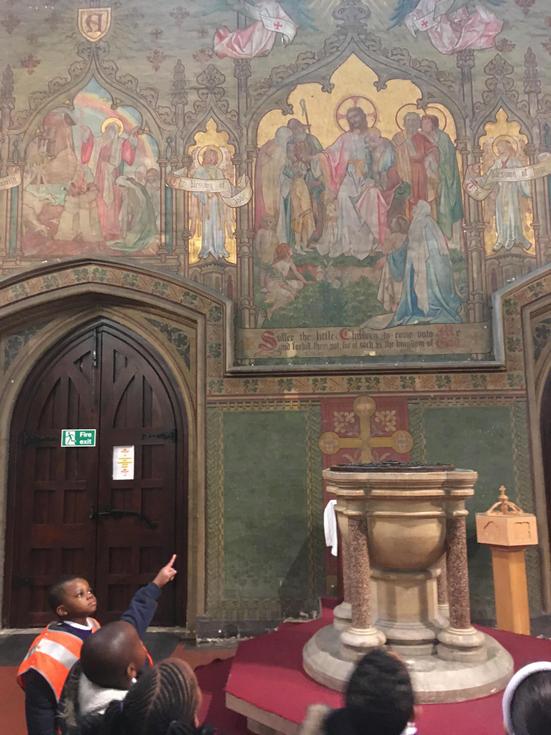 The children in Year 1 have been exploring Christian views and beliefs about God. They have discussed some of the things Christian people do to demonstrate their beliefs to others: 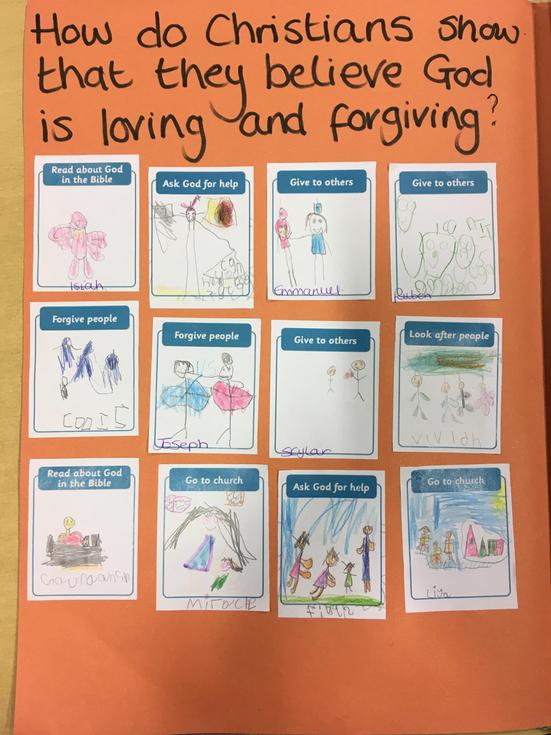 In Year 2 the children have begun to explore the concept of 'Incarnation' and how this fits into the 'Big Story' for Christians - the Bible. They have thought about what incarnation means and written some of their own explanations and ideas: 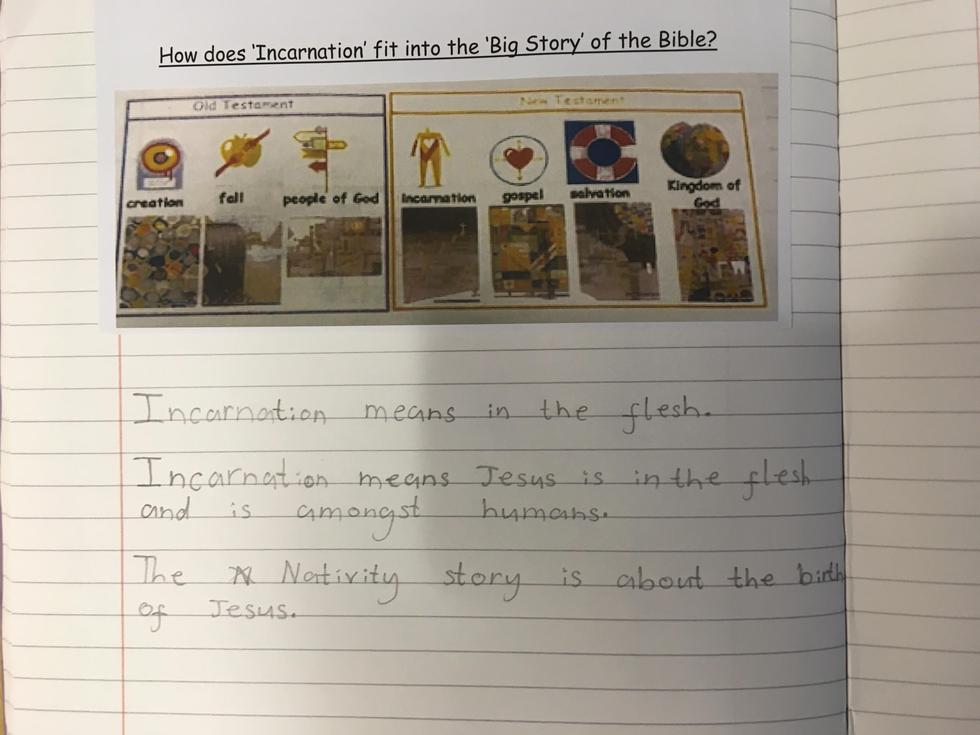 Year 3 have been exploring the importance of promises in Christianity and where they can be found in the Bible. They studied the story of Noah and God's promise to him. They have made links to their own lives and thought about what they would promise to the world: 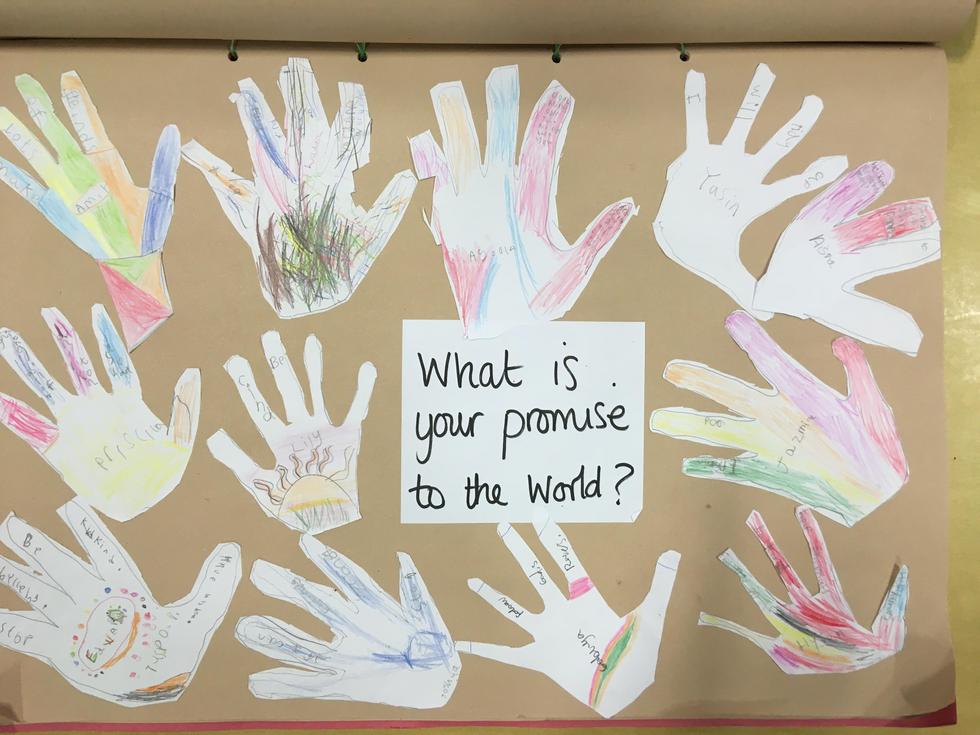 The Year 4 pupils have also been looking at Christian ideas about God and how he is portrayed in the Bible. They have suggested their own ideas about what they think the Bible says about God, using images as well as written work: 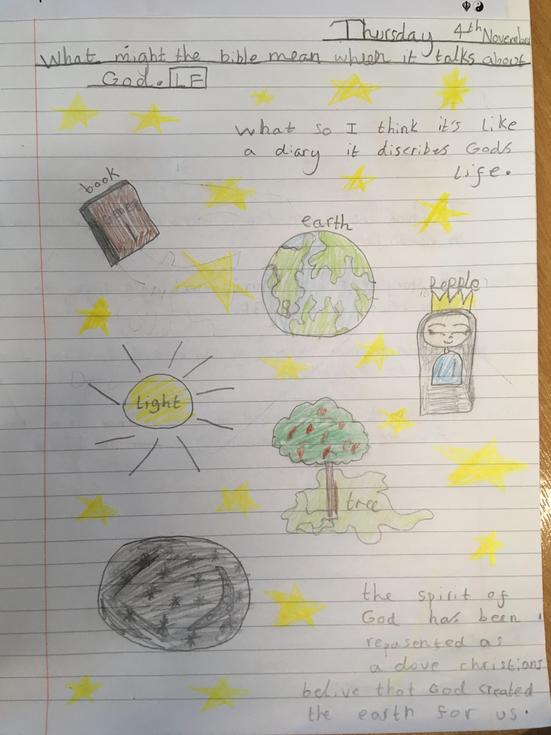 In Year 5 the children have also been studying the concept of 'Incarnation.' They have been exploring why the people of the time may have been looking for a Messiah. All their ideas were discussed and they recorded some of them on sticky notes in their RE Big Book: 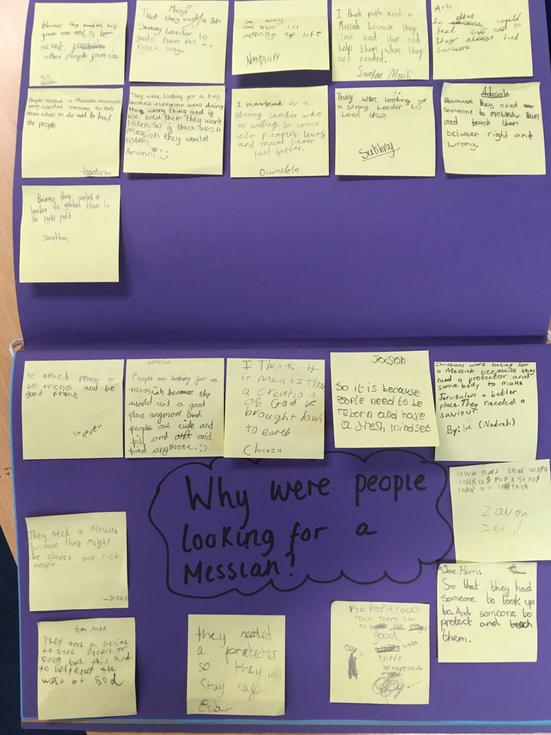 Our oldest pupils have been studying the ideas behind Creation and how these might compare to scientific ideas about how the world begun. This is a particularly difficult idea to explore and they have worked hard to express their thoughts and understanding in discussions, written work and art. 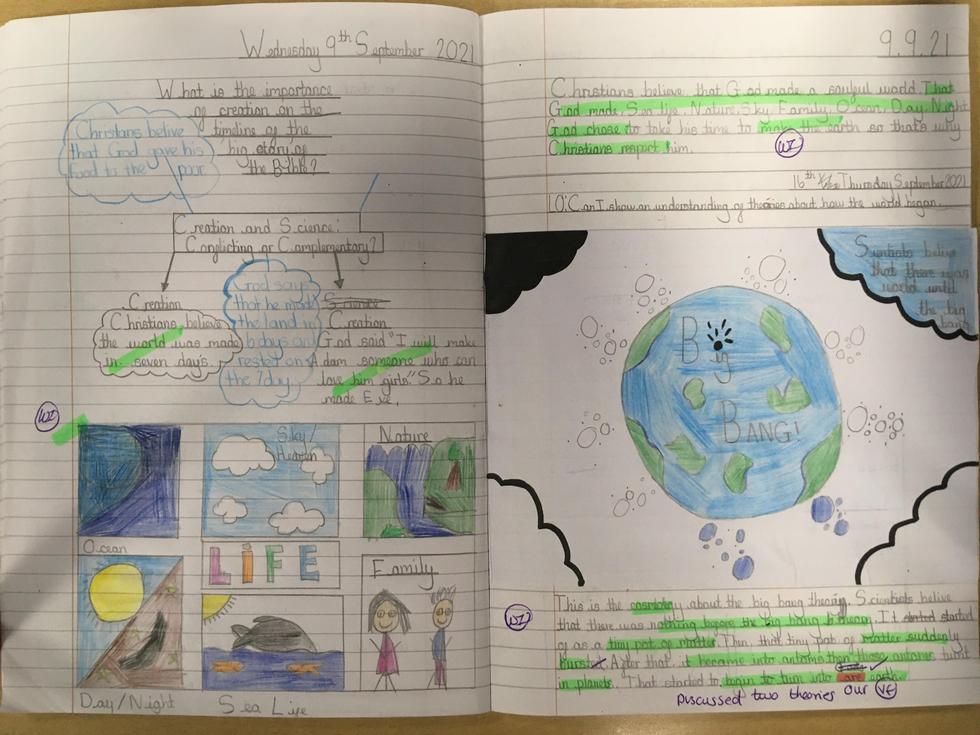 It has been a strong start to the term in RE with all year groups studying some of the core concepts of Christianity. Throughout the year the pupils will have opportunities to study further concepts and make links between them, as well as studying other world faiths.

In Reception, the children have been learning about how Christians prepare for Easter. They have acted out different stories and explored the symbol of the cross in their child-initiated learning.

Here, some children have been making their own palm crosses from palm leaves in preparation for Palm Sunday: 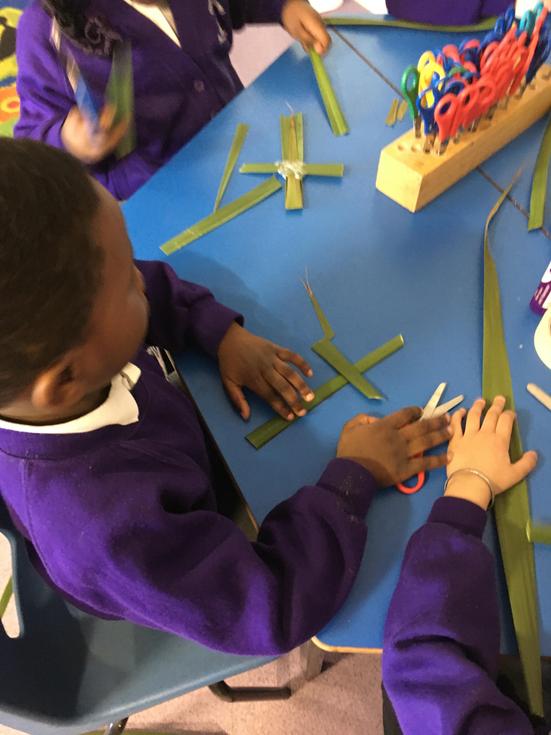 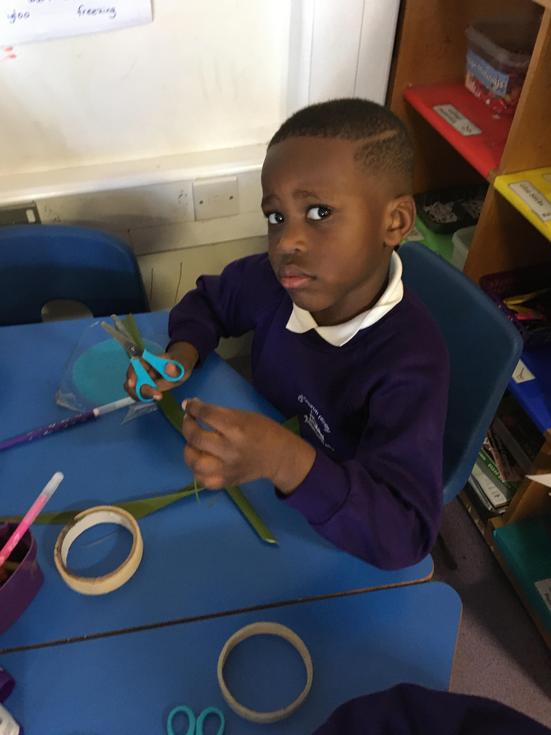 The children in Year 1 have been exploring Humanism.  They have been discussing what makes them happy. In RE we record our work in different ways. The children have used writing and art to express their ideas and gathered them in their class Big Book. 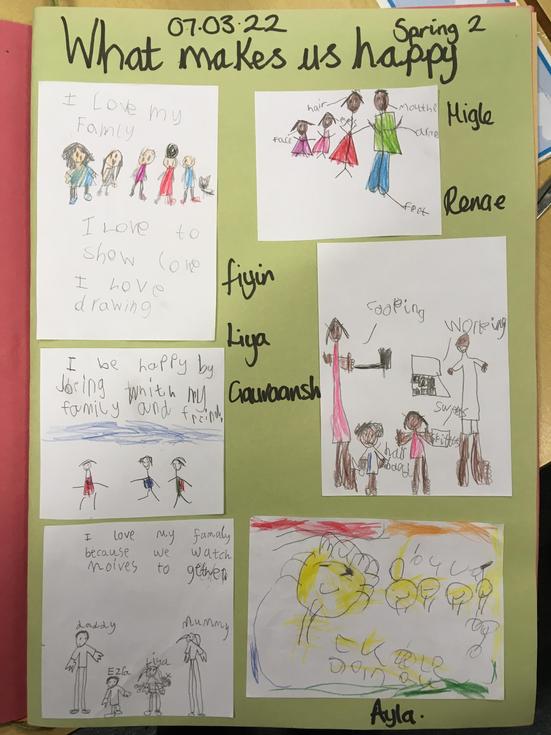 Year 2 have begun to explore the concept of salvation. They have been thinking about the Easter story and exploring the Christian idea of being rescued. They have been using parts of the Gospels to support their learning. 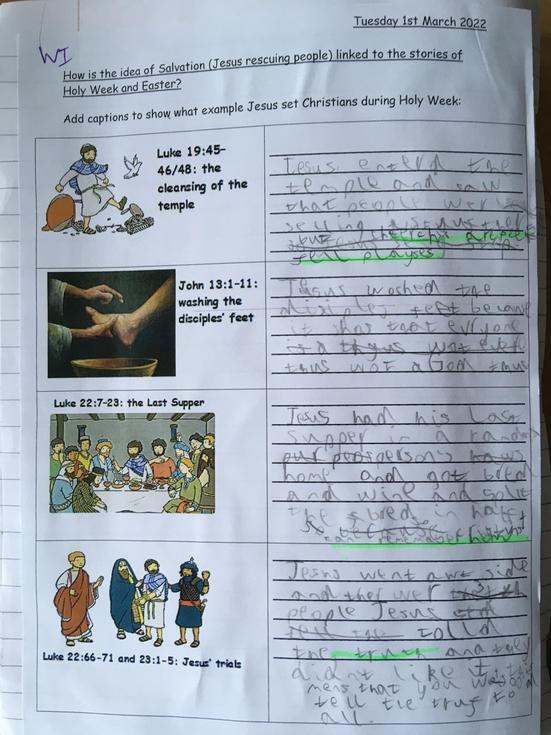 The Year 3 pupils have also been studying salvation. They have been discussing why 'Good Friday' is so-called and how Christians believe that Jesus rescues them in their lives today. 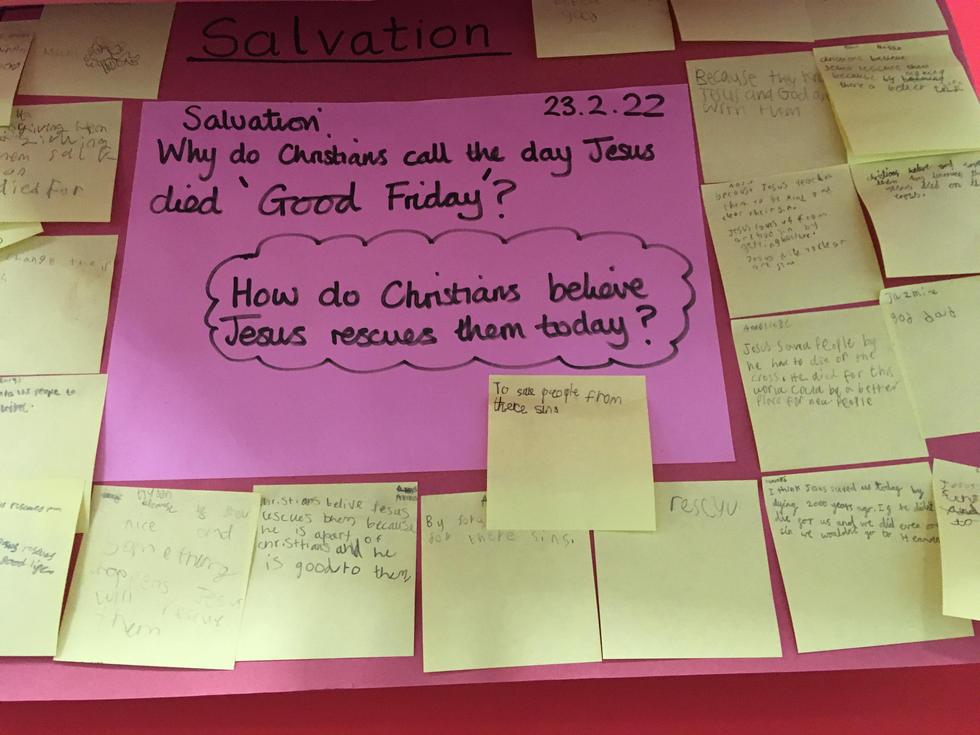 In Year 4 the pupils have been studying Biblical texts.

They have been exploring the meaning of the Easter story to Christians, and their own feelings around the idea of Jesus's death. 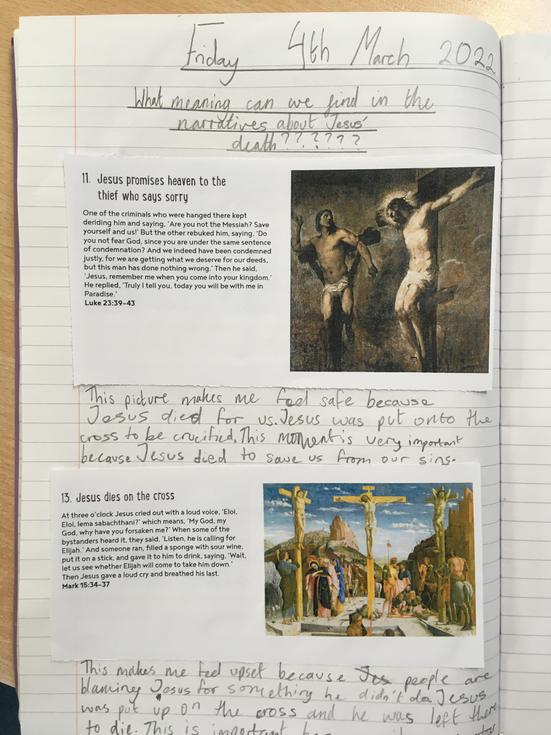 The Year 5 pupils have been exploring the Christian belief in the death of Christ through art: 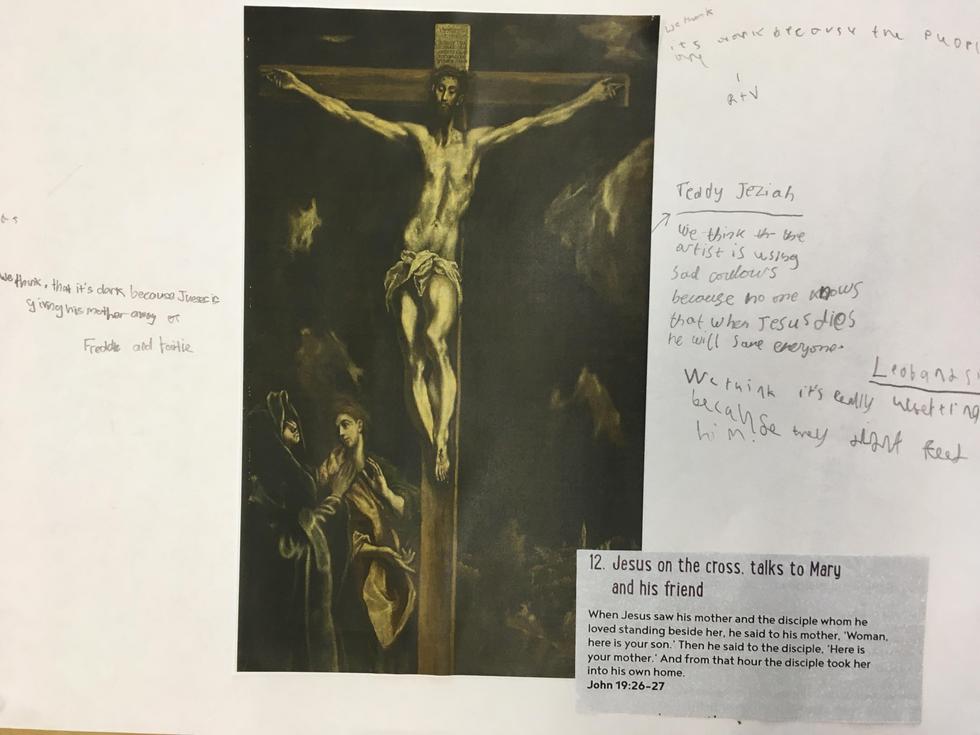 Our oldest pupils have been exploring the Bible in more depth.  They have been identifying different features of Gospel texts and how Christians use these texts to live their lives. 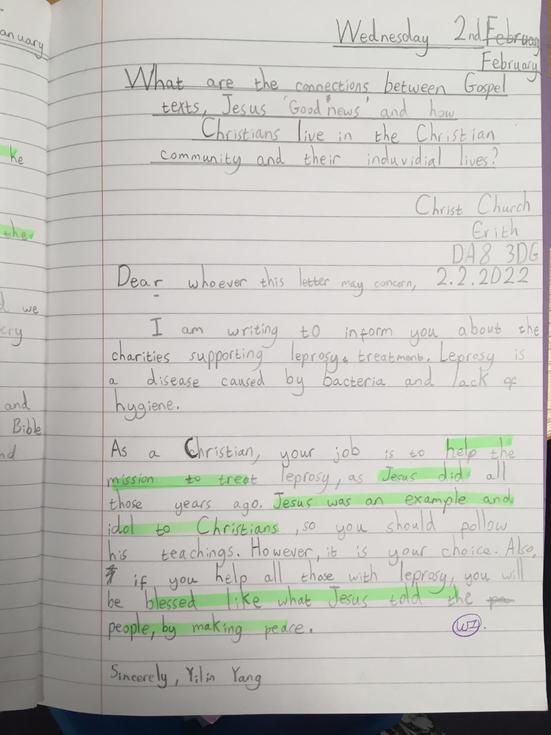 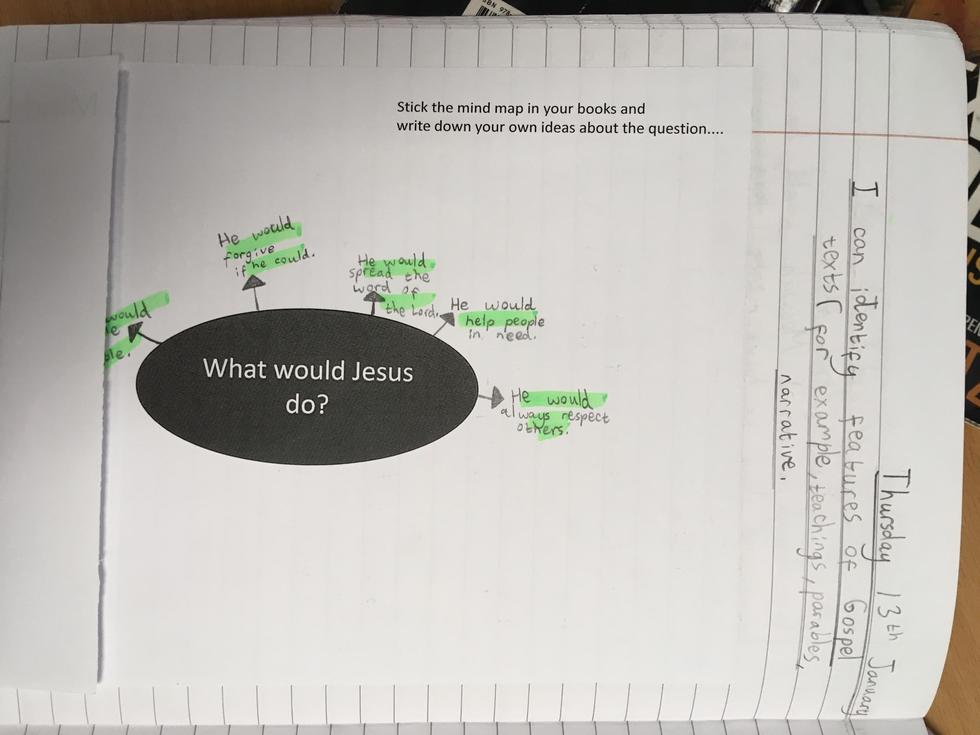 Our pupils have enjoyed learning more about Christianity through the core concepts.

In the summer term we will be looking in more depth at some of the other world faiths.